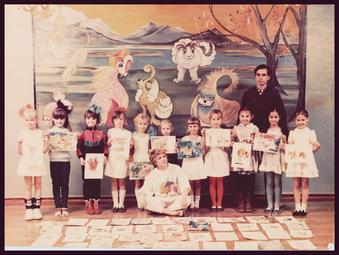 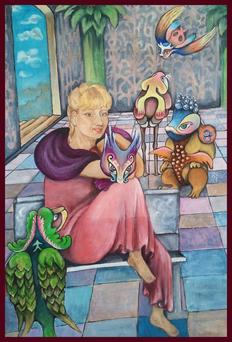 The year was 1991, the Soviet Union was in the midst of its transformation into becoming Russia.
That year on a winter day in Moscow, artist Marina Filimon created the strange creatures for the first time.
They appeared on the canvas of her oil painting, one by one displaying their distinctive forms.
Marina’s mother, when seeing the peculiar figures said, “Oh, what strange Chapliki you have created.”
The Chapliki, were born.
A second painting introduced more characters. In 1992, a mural “Chapliki at Play” was commissioned and painted in a grade school in Ural Mountains.

The same year the Chapliki were featured in an “independent, artistic, and esoteric” journal printed in Moscow.
Soon afterwards, they were used in two schools, one in Russia and another in Austria. The unfinished characters were used by the children to complete and color, as a means of self-expression.
Ultimately, in 1993 a simple finishing and coloring book for children was created and released on the Russian market. Ten thousand copies were published just as the author left Russia for the United States.
In the years that the author has lived in the USA, she has created more characters and painted a number of new paintings.
The book "The World of Belief" is an attempt to further the efforts started in Russia, while applying the concepts of “The Work”, to provide children of various ages with a viable and useful tool of self-expression.